“What about my ovaries?” Part 2 | The Paper Scanning Conundrum

OTHer blogs in this series

Part 1: “WHAT ABOUT MY OVARIES?” PART 1 | A CASE STUDY SERIES WHERE IT ALL WENT WRONG

For over 20 years, Access eForms has helped thousands of hospitals across the globe convert their paper-based consent processes into fully electronic workflows facilitated by patient electronic signature. Throughout these years, breakdowns at hospital sites facilitated the need for our technology and services. After all, necessity is the mother of invention, and often medical malpractice lawsuits associated with patient consent forms serve as the necessary driving force of innovation. While we have seen many issues, few of them reached the level of calamity as exhibited by the informed consent process that went terribly wrong for the University of Wisconsin Medical Center just a few years ago. In this installment of the blog series, we’re focusing on the simple yet profoundly challenging issue of how a single piece of paper can only be in one place at one time.

In this specific case with the University of Wisconsin Medical Center, a patient and their surgeon had agreed on the procedure that would be administered the following day. The paper informed consent was signed at the doctor’s office, which was physically and technologically disconnected from the hospital. The paper informed consent along with the appropriate orders relating to the surgery needed to be sent from the doctor’s office to the hospital, and as per the standard accepted procedure, these documents were faxed over. Unfortunately, the patient later called back to discuss the procedure with the surgeon, and they agreed on an alteration to the surgery. The surgeon documented this change on the paper informed consent by handwriting some additional notes, without striking through the old procedure. Later, the notes relative to this procedural change were entered into the physician’s electronic medical record system, but none of these changes were ever sent to the hospital. Ultimately, the notations of the alterations to the procedure existed solely as ink on the paper informed consent– one they were not faxed over to the hospital as an updated informed consent–and as electronic notes within the physician’s electronic medical record, which was not connected to the hospital’s EMR. This series of errors resulted in the patient receiving the incorrect procedure, which had to be rectified by follow-up surgery, putting the patient at even greater risk.

The Basis of the Issue | Object Permanence

The very simple problem here is that physical objects can only be in one place at a time. In this situation, the paper-based informed consent was resting in the doctor’s office in the patient’s paper chart. The surgical team was not acting on the most recent information because that information was noted on that single sheet of paper which they did not have access to. We have seen this issue in many hospitals with paper-based informed consents. Hospitals are complex environments with a large staff all trying to execute at the utmost professional level in the most stressful environment, day after day. Paper documents, such as informed consents, often have to pass through the hands of a number of different people across several different departments. This issue is exacerbated whenever you have facilities that exist separate from the hospital building. While faxing has been the trusted means to deliver these paper documents from an external facility to the hospital, it is still subject to a process that relies upon a human to send that document to the hospital and another human at the hospital to pick it up and carry that document forward. In other words, there is ample opportunity for human error to occur, resulting in a lost paper informed consent. On average, 14% of operative procedures are delayed as a result of missing paper-based informed consents, according to a JAMA study. 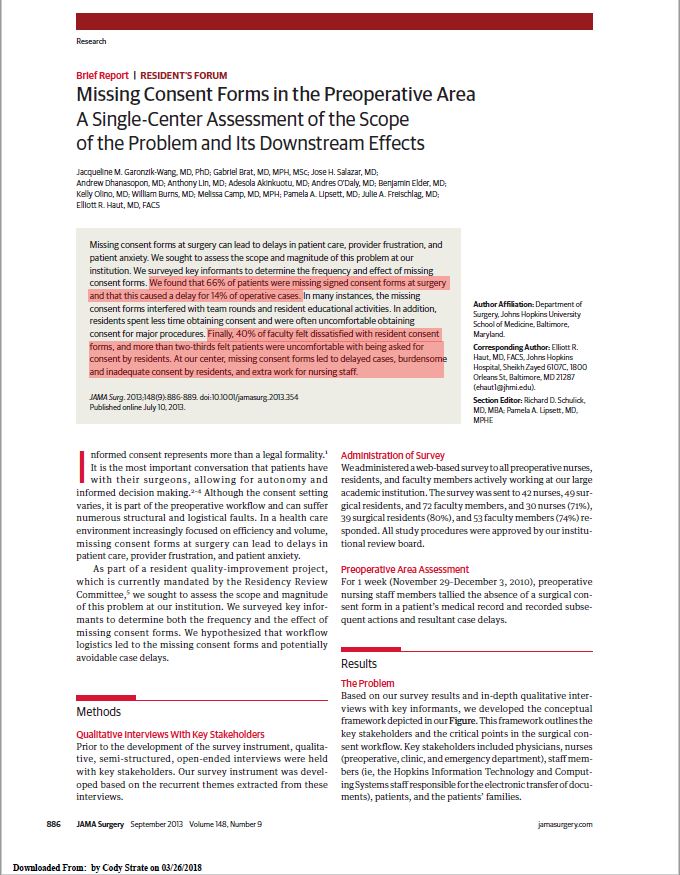 It is because of these lost paper informed consents that hospitals have sought out our solutions for decades. The best-case scenario is that a lost informed consent simply results in a costly delayed procedure, but the worst-case scenario is a situation where the incorrect procedure is performed. In order to resolve this issue, hospitals must apply technology solutions because there are inherent problems in a paper-based process. Furthermore, capturing the patient signature electronically on a fully electronic informed consent removes barriers to a successful hospital experience. Once a patient signs their electronic informed consent, that document can be immediately distributed to all the various locations within the EMR, circumventing any factors that could cause a paper form to get lost in the process.

If the surgeon in this scenario did not have to rely upon cumbersome paper-based processes and disconnected electronic medical record systems, this disaster could have been avoided. It is true that connected systems combined with patient electronic signature would have been helpful, but there is more to this story. Applying technology to a problem is great, but it is not the end-all-be-all in resolving the issues that might surface. In upcoming blogs, we will discuss the importance of informed consents being presented in plain language to the patient, as well as other issues associated with the infrastructure of hospitals and health systems.